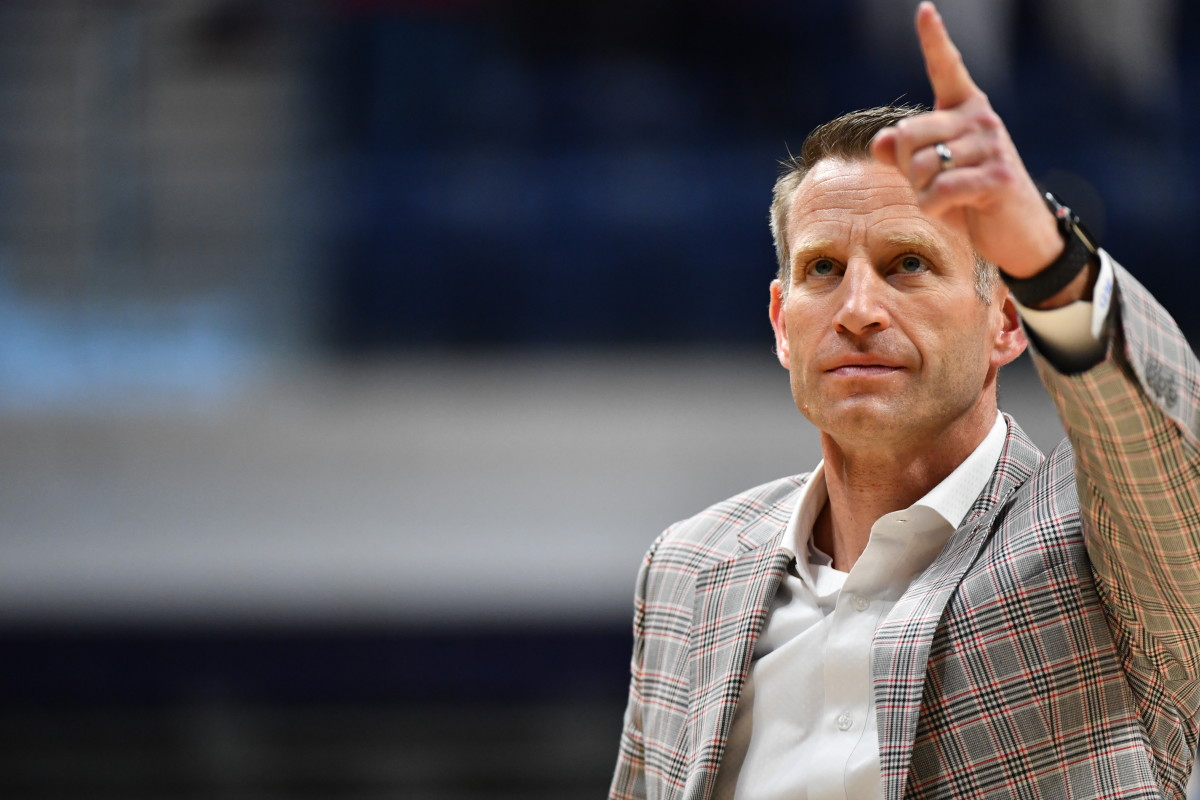 After a disappointing end to the 2021-22 season, Alabama men’s basketball is looking to recapture the magic it had during the previous season, when the Crimson Tide won the SEC Tournament and reached the Sweet 16.

And this year, the odds seem to be in the team’s favor.

Despite adding eight new players across four freshmen and four transfers, Alabama basketball has the deepest roster it has had since head coach Nate Oats arrived in Tuscaloosa in 2019. At SEC Tipoff ’23, Oats spoke about how is sure of his current roster.

“We have a good, young group,” Oats said. “We have a lot of new faces. We have 12 kids on scholarship, only four of them have ever played a game for Alabama before and [Jahvon] Quinerly is out until maybe the SEC plays, sometime in December, with the ACL. So we’re going to have three guys that ever played a game for us in our first game, that’s Darius [Miles]Charles [Bediako] and Noah [Gurley]. That means we have eight new faces — four are freshmen, the others are all transfers.

“We need a lot of production from new faces, so I think you’ll see some, there might be some games early in the year where we’re going to be a little inconsistent. I think we have a lot of room for growth and we are looking to peak at the end of the year. So we may go through some growing pains soon. We have a tough non-conference schedule to prepare for. But we’re looking forward to it.”

The Crimson Tide has a tough non-conference schedule early in the season, as Oats mentioned. In addition to having a game in Houston scheduled as well as a home game against Memphis and a neutral-site game against Gonzaga, Alabama will also face some top opponents at the Phil Knight Invitational — including a potential matchup with preseason No. 1 North Carolina.

Oats has always said he prefers a tough non-conference schedule early in the season so the team can work out all of its issues before SEC play, and this year is no different.

Speaking of SEC play, the Crimson Tide have a decently tough schedule, with one positive note being that they will host Kentucky. The Southeastern Conference schedule is never easy, and a home-and-home with Auburn and a road game at Tennessee provide no relief. Another tough draw is a home-and-home against Arkansas, who is expected to be one of the best teams in the conference this season.

Oklahoma’s road game for the SEC/Big 12 Challenge won’t be easy either.

While the schedule may be tough, Alabama’s talent and depth has the potential to win quite a few games this season. Let’s take a look at the 2022-23 Crimson Tide roster:

With All-SEC senior guard Jahvon Quinerly expected to be sidelined until at least early December while he recovers from the ACL injury he suffered late last season, one would think based on previous seasons that Alabama would she could be small. skinny in the back of the field.

That would be a false assumption.

Alabama is deeper in both the backcourt and frontcourt than at any time under Oats’ tenure, and it shows. Even with Quinerly’s absence, the Crimson Tide is still loaded at both the one and two spots. With his return — whenever possible — the danger of Alabama’s backcourt will only increase.

While Quinerly is out, Ohio transfer Mark Sears and freshman Jaden Bradley will battle for the top spot at quarterback. Both are highly capable, but Sears has the edge due to experience. In Ohio, Sears averaged 19.6 points, six rebounds, four assists and two steals per game last season. He averaged 40 percent for the Bobcats, making him a welcome addition in Tuscaloosa. Whether he’s a starter or not, Sears will be an immediate contributor for Alabama.

Bradley was a five-star recruit and brings a premium old-school game with him. Bradley is also a physical guard who brings a solid defensive game and provides consistent stability on offense. Between him and Sears, the point guard spot is more than secure while the team awaits Quinerly’s return.

The No. 2 carries arguably more competition than any other position on this year’s team, and for good reason: the depth of the role is leaps and bounds better than in years past.

Sophomore guard Nimari Burnett will finally see playing time in an Alabama uniform after missing his freshman season with a knee injury. Burnett, a former McDonald’s All-American, brings skill on both ends of the court and will likely be the starter, but he’ll have all the competition he can handle.

Junior Darius Miles brings SEC experience to the wing. He played in 30 games last season and averaged 5.8 points and 3.3 rebounds per game. While effort has been an issue for Miles in the past, he appears to have matured in the offseason and looks to have a solid third season under Oats.

Dom Welch came to Alabama as a grad-transfer from St. Bonaventure. A versatile, big-bodied wing, Welch brings over 100 games of experience with him. Throughout his career, Welch has been highly reliable on both ends of the court, averaging 11 points and six rebounds per game while shooting 37 percent from downtown.

Rookie Rylan Griffen is another four-star who will be an immediate contributor this season. As the third-leading scorer in the nation according to 247Sports, Griffen is an elite scorer and will also compete with Burnett at the dual spot.

The group of Burnett, Miles, Welch and Griffen also has the size to play small forward should Oats decide to go three-guard, which is often his move when he wants to play small. That being said, the Crimson Tide has a surefire starter at three.

With that we move to the front of the field.

Rookie Brandon Miller is all that and a bag of chips. Enough talking.

Alabama fans have been excited all offseason to see the 2021 McDonald’s All-American hit the hardwood, and they don’t have to wait much longer. In Europe on the Crimson Tide’s summer tour, Miller averaged just under 23 points per game, along with some impressive defensive stats. In the team’s loss at TCU, Miller was again tops with 33 points.

Despite being a true freshman, Miller is pretty much a guaranteed lock as the starter for Alabama this season. He will likely play three spots as a small forward. Oats has started emergency freshmen in the past, but for Miller it’s because of one thing: he’s just that good.

The team’s other big guards like Burnett, Miles, Dom Welch and Rylan Griffen will compete for minutes behind Miller at the three. But it will be Miller who gets the starting job, with Burnett in particular likely to be the two-spot starter in shooting guard.

At the four, the Crimson Tide’s starter will likely be graduate student Noah Gurley. Not only does he bring leadership to the position, but the former Furman transfer also brings a dearth of experience from his 2021-22 campaign with Alabama.

Gurley may be a starter, but he will compete with JUCO transfer Nick Pringle. Pringle played one season at Wofford before transferring to Dodge City Community College, where he became one of the most sought-after JUCO recruits in the country. Pringle brings the body and athleticism fit for an SEC power forward and it shows.

Pringle could also see minutes at the five, but will likely have two talented players ahead of him in that role.

High school senior Charles Bediako was one of the Crimson Tide’s representatives at the SEC Tipoff, and for good reason. Bediako was easily one of Alabama’s most consistent defenders last year and has already established himself as a team leader despite his age. He is one of the best rim protectors on the team and serves as a lob threat on the offensive end of the court.

Behind him will be freshman Noah Clowney, a 6’10” four-star recruit who brings length and talent to the frontcourt. Clowney needs to add size and strength to his frame before he sees significant minutes, but there’s no doubt he will. be in ultimately benefiting the team.

One of the common threads of discussion so far this preseason has been Oats and his players approaching this season with a chip on their shoulder. Complacency was an issue last season that Oats mentioned repeatedly during his press conferences, and it was clearly an issue with last year’s team that stuck with him the most this season.

Oats laid out one of his team’s biggest goals in dealing with the chip and what his players will bring to the table this season after a lackluster end to 2021-22.

“One of our goals is to try to peak at the right time this year,” Oats said. “We’re not peaking in December or January. So we have to be strategic about how we manage the load on the players, all that, training and everything – but a lot of it is more mental. Just like you said, having a chip on our shoulder and wanting to prove something . We really only have four guys that have played in a game here and I think they all have something to prove. Quinerly was the only one who played significant minutes on the team that won the SEC Championship and he’s been out a little bit with injuries. Now he’s got something to prove, to prove that he can get back to where he was before his injury. We have a lot to prove this year.”

Mentality was a key issue for the team last year, and Oats seems to have done everything in his power to remove that issue from the equation. Every player who met with reporters this preseason addressed how they are using last season as a motivational tool to learn from, and that should instill confidence in Alabama fans heading into this season.

It’s a long road to Nashville and the SEC Tournament, but this Crimson Tide team is more than capable of recapturing the magic of 2020-21 if they can play to their full potential on paper.