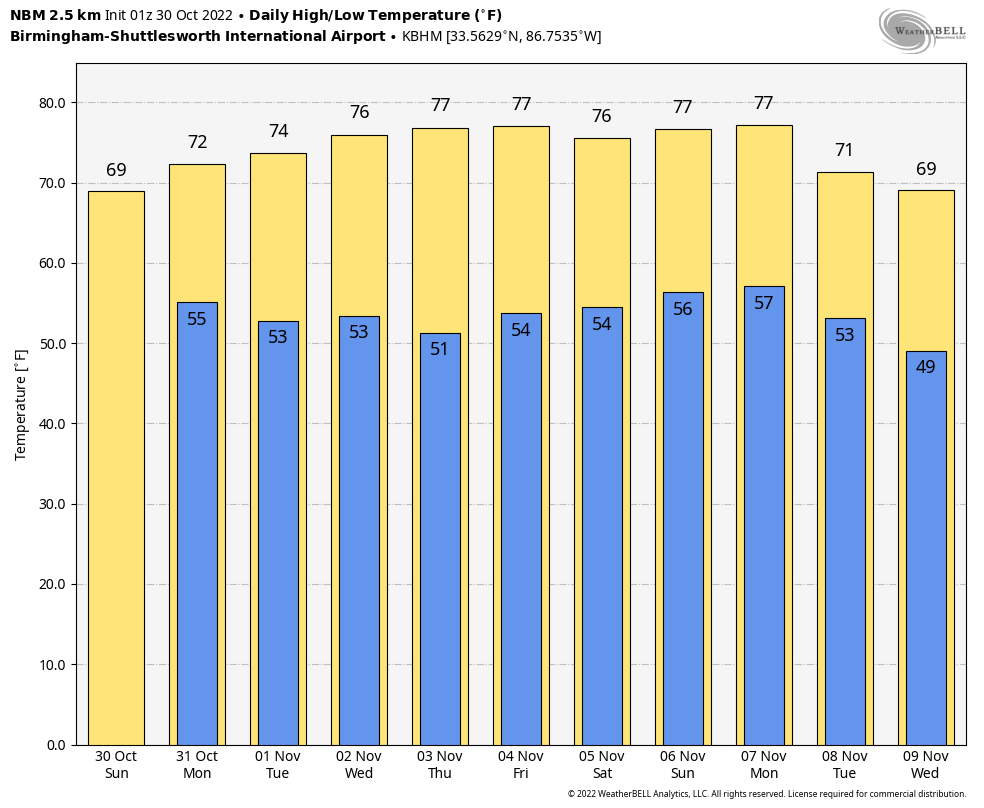 Saturday was a beautiful day in north and central Alabama. We enjoyed the beautiful orange colored landscape brought to us by the sunrise, dappled sun rays from the morning, some clouds, a few showers over West Alabama, mild afternoon reading and a fresh southerly breeze. We tracked storms back to the southwest over Louisiana and Mississippi that intensified ahead of the low. These storms moved into southwest Alabama and southeast Mississippi late yesterday afternoon and early evening. Damage was reported near Foley and in the Oyster Bay and Gulf Shores areas of Baldwin County, where a mobile home was destroyed. Several impressive waterspouts have been spotted over Mobile Bay.

RAINY SUNDAY MORNING: A low is near Little Rock and has become closed (a fancy way of saying a cold front has caught up with a warm front in a weakening system.) Areas north and east of I-22/US-280 are in the 50s, while the rest of the area is in the 60s to start the day. A secondary surface low is likely to form over west-central Alabama this morning, and a narrow sliver of a warm sector may operate across the southern portions of the area. So you can expect a high chance of rain, especially in the morning hours. There could be a few rumbles of thunder, but you shouldn’t expect any severe weather today. Breezy most of today with southeast winds gusting over 20 mph in places. Clouds will be pretty thick across much of the area, though they will clear up later in the afternoon in western areas in places like Livingston, Butler, Jackson and Mobile in southwest Alabama. Highs will generally be in the lower and mid 70s, except in northwestern Alabama, where highs may not get out of the upper 60s.

ALL HALLOWS’ EVE: Skies may slowly clear on Halloween Monday and plenty of moisture remains around. There could also be a few showers left during the day, but most of that should be in Georgia late in the day. Highs will try to get out of the 60s unless the sun looks more like I think. Everything points to fabulous weather for trick or treating on Monday night. Temperatures will drop into the upper 50s by 9 p.m., but by then there should be partly clear skies and light winds.

FAREWELL TO OCTOBER: October comes to a mild and seasonal end tomorrow night. For the month, temperatures will end up averaging around 61.3 F, which is about three and a half degrees below the normal average of 64.9. The highest temperature for the month was 84F on the 7th. The coldest mornings were on the 19th and 20th, when the mercury dropped to freezing. Before this current system, we recorded 2.10 inches per month, spread over three days. If we pick out another 0.60 today, we’ll end the month at around 2.70 inches, which is a bit below the average of 2.99 inches.

AND HELLO NOVEMBER: November is the transition month to winter for much of the country, and Alabama is no exception. The days are approaching their shortest days of the year and the heat budget is becoming increasingly negative, so average temperatures are falling. The storm track becomes more active and precipitation totals increase. November is Alabama’s secondary severe weather season, which in some recent years has been busier than the spring primary season. In 2002, an unusually strong outbreak on November 10 spawned a series of ten tornadoes across North Alabama that killed 12. Two of the tornadoes were rated F3.

A BEAUTIFUL WEEK AHEAD: Just get ready for some gorgeous weather for the rest of the week. There could be a light shower or two on Wednesday, but they will be insignificant. Highs will be in the lower to mid 70s and lows will be in the lower 50s. Just a little above normal for this time of year, but no one will complain. 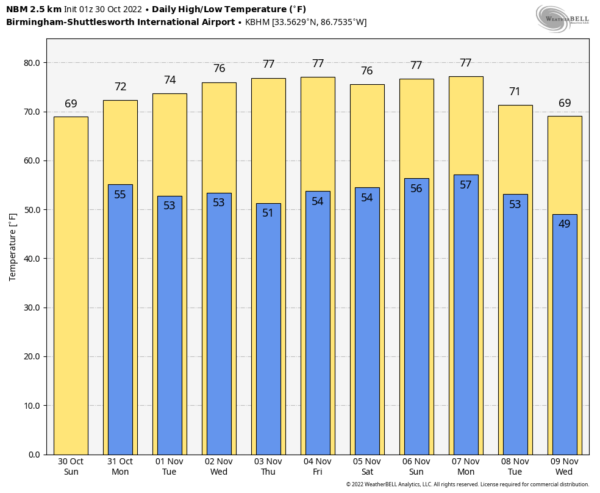 WEEKEND OUTLOOK: The weekend also looks beautiful with high pressure to worry about. Highs will be in the mid 70s and lows in the lower 50s.

TROPICS: A disturbance in the central Caribbean has a fairly good chance of developing into a tropical depression and possibly a tropical storm over the next few days. It shouldn’t be too much and it should go west towards the Yucatan and stay out of the Gulf. A big wave of cold air is moving north over South America, and this strong cold front looks like it could be the source area for something to spin up over the southwestern Caribbean next weekend. This system could be interesting as it could affect Cuba, the Bahamas and possibly the US Southeast in the second week. Something to watch.

IN THE WESTERN PACIFIC: Deadly flooding and landslides from Tropical Storm Nalgae hit the Philippines. At least 42 people have died after heavy rains lashed southern parts of the country following the approach of Tropical Storm Nalgae. The storm is expected to move northwest over the next few days, further hitting the Philippines this weekend, then Taiwan and southeast China this week.

BEACHCAST: We had a fabulous weekend at Alabama’s Gulf State Park last week with beautiful weather and thinner crowds than you get in the summer. Now that yesterday’s bad weather is easing, expect beautiful conditions on our beaches too. The forecast calls for partly cloudy skies each day Monday through Sunday with few, if any, showers. Highs will warm up to 80 degrees. Lows will be in the lower 60s. The water temperature is lower than 60s. There will be a high risk of rip currents today.

ADVERTISE WITH US: Deliver your message to a highly engaged audience by advertising on AlabamaWX.com. The site has enjoyed over 29 MILLION page views in the last 12 months. Don’t miss it! We can tailor a creative, flexible and affordable package to suit your organisation’s needs. Contact me, Bill Murray, at (205) 687-0782 and we’ll talk.

WEATHERBRAINS: This week’s panel will feature Dustin Jordan from the NWS in Jackson, Kentucky. His office was responsible for all of the severe flooding that hit the eastern part of the Bluegrass State earlier this year. . Watch the show at www.WeatherBrains.com. You can also subscribe on iTunes. Now it’s easier than ever to watch shows live on . You will be able to see the show on James Spann Weather Channel 24×7 on cable or live on the air on Channel 2.

ON THIS DATE IN 1991: A major coastal storm spawned off the East Coast on this Halloween night. A cold front moving offshore met up with Hurricane Gracie and one of the worst nor’easters the East Coast has ever seen was born. A major low pressure system is battering New England with strong winds and tides 4-7 feet above normal. Winds gusted to 50 miles per hour along the coast for several days, and tides were already high when the storm swept in from the east. The result was major coastal flooding and beach erosion. More than 1,000 houses were damaged or destroyed. Winds reached hurricane force in Chatham and Gloucester MA. The waves at sea were said to be as high as 63 feet! The damage reached 200 million dollars. 33 people died. Follow my weather history tweets on Twitter. I’m @wxhistorian on Twitter.com.