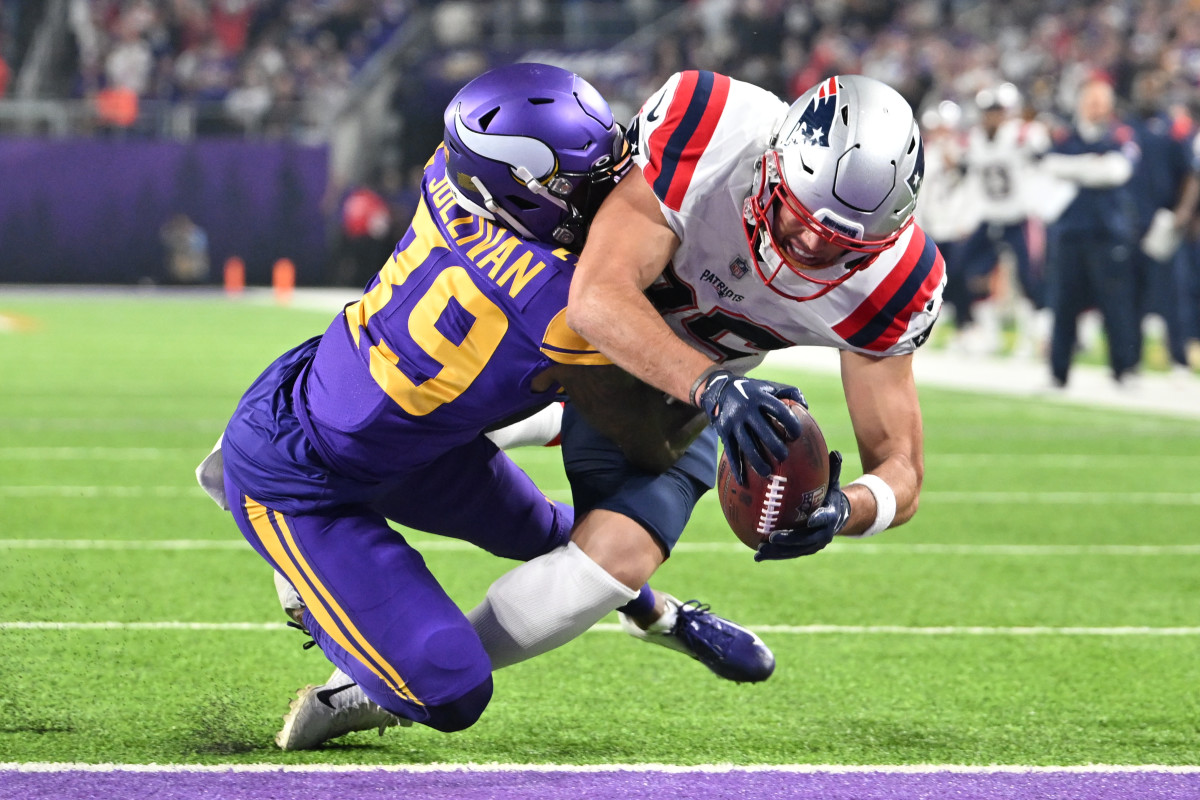 With just over six minutes left in the third quarter of the New England Patriots Week 12 matchup with the Minnesota Vikings at U.S. Bank Stadium, Pats quarterback Mac Jones found tight Hunter Henry on short left on 3rd and Goal for a score of six meters… seemingly his second touchdown catch in as many drives.

Although Henry’s reach to the end zone broke the goal line, the officials concluded that the tight end lost control of the ball as it went to ground. Despite having both hands under the ball, the call was reversed. New England was forced to settle for a 24-yard Nick Folk field goal, facilitating their 33-26 loss to the Vikings on Thanksgiving night.

While many social media sleuths will continue to debate (for the next few days) whether the catch was indeed made, Henry is pretty sure he’s done his job.

“They called what they called,” Henry said after Thursday’s game. ‘I think I got it. But, I mean, they called and have to live with it.’

Asked about the aforementioned ‘loss of control’, further explanation given.

In an effort to provide final clarification, NFL Senior Vice President of Officiating Walt Anderson explained why the pass was considered incomplete.

“He [Henry] went to ground,” Anderson told PFWA Pool Reporter Mike Reiss. “The ball finally hit the ground and then he lost control of the ball in his hands.”

To a follow-up question as to why Henry didn’t gain possession before the ball hit the ground, Anderson replied:

Replays from almost every angle clearly show that Henry had both hands on the ball. However, Anderson insisted that his grip on the ball was not the deciding factor in the final decision.

While the umpires’ reversal clearly turned the tide in the Vikings’ favor, New England still had several chances to regain both momentum and the lead. Protection breaks along the offensive line, combined with questionable play called into clutch moments, darkened an otherwise great day for the Jones and the Pats offense.

As such, the Pats starting quarterback doesn’t lay the blame for his team’s loss on Henry’s controversial reversal.

“We have to move on from that game and play the rest of the game,” Jones said on the podium after the game. “The umpires have work to do. They looked at that play and ruled it incomplete…there were other chances we had where we could have taken it…one call can’t determine the outcome.”

Therefore, Jones, Henry and the Patriots must turn the page as they continue their pursuit of the postseason.

The loss drops New England to 6-5 this season; they are essentially in the territory they need to win as they prepare for their Week 13 game with the defending AFC East Champions, the Buffalo Bills.

The Pats welcome the Bills (8-3) into the friendly confines of Gillette Stadium on Thursday. December 1 for a kickoff at 8:15 p.m. ET.

New England and beyond! To get your Patriots game tickets from SI Tickets…here!

Want the latest news and insider information on the Patriots? click here