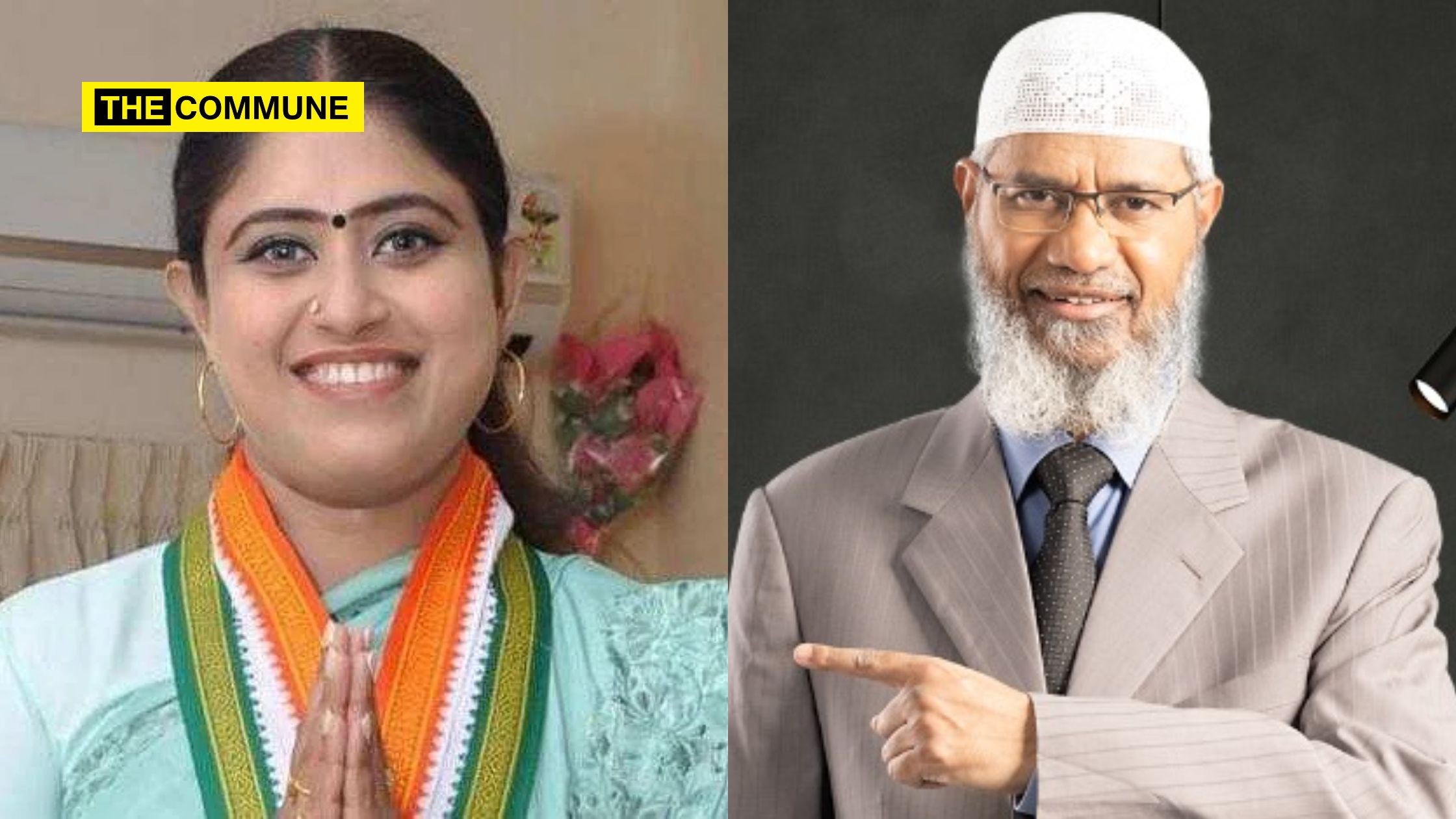 Vijayadharani is a three-time Congress MLA and a practicing lawyer. She held high-profile posts in the Congress Party. She was the leader of the Legislative Party of the Tamil Nadu Assembly Congress and is a former president of the Tamil Nadu Magalir Congress (TN Congress Women’s Wing). In 2016, she was promoted to the position of Secretary General of the All India Mahila Congress.

The controversial 2016 video shows the Congress MLA from Kanyakumari district of Tamil Nadu praising the “wisdom” of fundamentalist Islamist preacher and Muslim evangelist Zakir Naik, a fugitive wanted in India by the CBI, NIA and the ED in connection with various matters ranging from hate speech, incitement to terrorist activities, forced conversions to money laundering.

In the short clip doing the rounds on Twitter, Vijayadharani mentions that Zakir Naik reminds her of herself, that the man has done a comparative study of the religions of Hinduism, Islam and Christianity and talked about their merits and that he is indeed a wise man, who is unfortunately/unjustly under investigation by the Indian government (referring to the BJP). She goes on to state unabashedly that such governments (led by parties like the BJP) are unnecessary and should not be elected by the people!

The reckless, uninvestigated, non-factual comments about a known Islamic fundamentalist and a wanted man by Indian law enforcement agencies, made by an elected leader of the ‘secular’ Congress party, couldn’t be further from the truth about Zakir Naik, whose admirers are including many banned Islamic organizations. Vijayadharani’s irresponsible comments are not befitting a national political party, but the Congress party has predictably not posted a significant response to the embarrassing incident.

In reality, Zakir Naik’s preaching proclaims his irrational, prejudiced view of Islam as a religion superior to all others and Islam as the only “true” religion. Zakir Naik is a radical ‘Salafist’ Islamist and Muslim evangelist, often criticized for preaching Islamic supremacy. He is the founder and president of the Islamic Research Foundation (IRF) based in Mumbai and the founder of the channel ‘Peace TV’. His preaching has been banned in several countries, including India, Bangladesh, and Canada
the United Kingdom and Sri Lanka. Several terrorists, including the 2006 Mumbai train and Dhaka cafe attackers, have claimed to be motivated by his extremist speeches. His speeches are also said to have inspired the deadly explosions at Sri Lanka’s ‘Easter Sunday’ church in 2019.

In November 2016, the Indian government had declared the IRF of Naik an unlawful association under the Anti-Terror Prevention of Unlawful Activities Act (UAPA). Soon after, the National Investigation Agency (NIA) filed a case against Zakir Naik, accusing him of inciting many people to terror activities and promoting enmity between various religious groups in India through his public speeches and lectures. Four of his properties in Mumbai have been seized by the NIA.

Congress MLA Vijayadharani had made the unverified remarks at a 2016 Eid celebration event organized by the Social Democratic Party of India (SDPI), the political front of the terror-linked Islamist organization PFI (Popular Front of India), which was banned earlier this year. PFI has its roots in the outlawed SIMI and its cadres have been charged or convicted in at least four different terror cases, apart from allegations of the murder of several Hindu activists. An NIA probe concluded that “PFI had consistently engaged in actions detrimental to national security”.

Zakir Naik is currently a fugitive living in Malaysia, a Muslim country that granted him permanent residency after he was denied similar opportunities in countries such as the UK and Canada that refused to take him in. The Indian government has revoked his passport. Interestingly, Malaysia recently banned Zakir Naik from public speaking following reports of divisive, inflammatory speeches against Malaysian Hindus of Indian descent and Malays of Chinese descent.

“Zakir Naik is a saint” that is a congressional sitting MLA from TN
Saint present
FIFA world cup
pic.twitter.com/Jzlrl8nQfl

The spread of the 2016 TN Congress leader’s music video praising the radical Islamist with an unsavory reputation in India and abroad comes as the internet is abuzz with news that the 2022 FIFA host nation, Qatar, Zakir Naik had invited to the World Cup. Inauguration of the cup in Doha, on Sunday. Qatar has informed India through diplomatic channels that no official invitation has been issued to Indian fugitive and Islamist Zakir Naik to attend the opening of the FIFA World Cup in Doha on November 20, 2022. Qatar claims that third countries deliberately spread “disinformation” to spoil bilateral relations between India and Qatar.

Click here to subscribe to The Commune on Telegram and get the best stories of the day delivered personally to you.