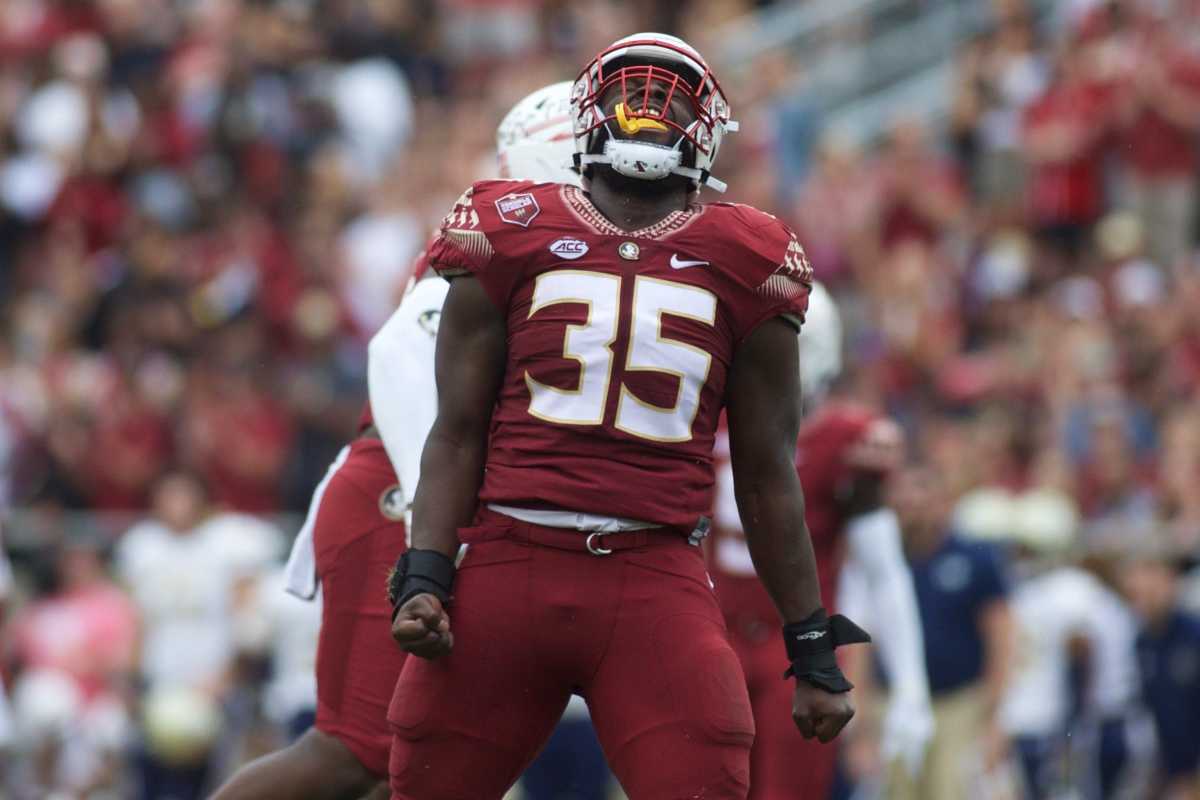 Florida State football kicked off the 2022 season with an impressive 4-0 start and some much-needed support from its fans. However, the Seminoles endured a 3-game skid in the following weeks, leaving many concerned about the program’s trajectory. The ‘Noles enjoyed a bye week last week and were given the opportunity to reset, refresh and bring back key players from injury. After three morale-shattering losses and one excruciatingly long week without football, Florida State returned to Doak Campbell Stadium on Saturday to take on another ACC program and perennial thorn in Georgia Tech.

The Yellow Jackets were riding a two-game winning streak against the Seminoles dating back to 2015. Despite losing their head coach early in the season, Georgia Tech played some inspiring football and swept both Pitt and Duke. Georgia Tech somehow found itself in second place in the ACC Coastal Division. Entering the game against the Seminoles, the Yellow Jackets’ season was far from a write-off. Even though the stats don’t shine favorably on them, Georgia Tech was by no means an “easy win” for the Seminoles. After all, the Yellow Jackets have consistently found ways to screw up the ‘Noles over the years (No, I still haven’t forgotten the Miracle on Techwood Drive, nor will I ever). Conversely, Florida State was in the midst of a three-game losing streak and desperate to prove it could right the ship. For Mike Norvell et al. was the game against Georgia Tech an opportunity to show much-needed improvement in front of the home crowd; an opportunity to revive excitement and interest even after a string of close losses. Despite a slow start, FSU was able to overcome the Yellow Jackets to record their fifth win of the season.

This contest belonged to the Seminoles all afternoon and they showed their prowess in every facet of the game. For many, it was a career-high day highlighted by a phenomenal performance through the air by quarterback Jordan Travis, who threw for 396 yards and 3 touchdowns. With the win, Florida State moves to 5-3 on the season (3-3 in the ACC) and is one win away from returning to postseason football for the first time in three years.

Florida State did their job on Saturday, so let me do my job and recap some key moments from the day. We then turn our attention to the upcoming competitive game against a school in Coral Gables.

Saturday’s game did not start the Seminoles as expected. While the defense did its job, holding the Yellow Jackets to -1 yard of total offensive production after two drives, Florida State’s offense struggled to find its rhythm. On their first drive, the ‘Noles failed to convert a 4th and 3 after quickly advancing to the Georgia Tech 33. With no points on the board, quarterback Jordan Travis led the Seminoles back down the field for their second offensive drive of the game. .

FSU started the drive with great field position (FSU 46). In just nine plays, Florida State moved the ball down to the GT 3-yard line. On 2nd & Goal, the ‘Noles came out of a timeout and tried to pass the ball to Mycah Pittman on a jet sweep, but Pittman was only able to fall forward for a gain of 2. The ‘Noles were stopped just short of the goal line. Unable to get the offense going in time, head coach Mike Norvell furiously called out the Seminoles for the second time in halftime. When the offense took the field again, it was running back Lawrence Toafili who lined up right behind center in the Wildcat formation.

Facing 3rd & Goal from the 1 yard line, Lawrance Toafili was ready to take the direct snap. In what has become a frustrating trend for the Seminoles, the snap was fumbled, recovered by Georgia Tech and returned to the FSU 35-yard line. The Yellow Jackets would go on to kick a 38-yard field goal to take a 3-0 lead early in the game. That’s right, Georgia Tech held a 3-0 lead with just 2 yards of offense, and what was a surefire scoring opportunity for the ‘Noles quickly turned into a deficit.

In each of its last three losses, Florida State has struggled to establish a consistent offensive attack. The offense would go silent for one game in the first half or fail to score in the second. Inconsistencies combined with self-inflicted injuries plagued Florida State’s offense. At the start of Saturday’s game, it looked like that would be the case again. The ‘Noles turned the ball over on downs on their first drive and continued to fumble the ball on their second drive, leading many to wonder what happened during the bye week. Fortunately for Florida State’s offense, the defense completely outclassed the Yellow Jackets. It was only a matter of time before the Seminole offense came alive and the defense was buying them time.

Following a GT field goal, running back Trey Benson and Lawrence Toafili got the ‘Noles down the field on a 9 play, 80 yard touchdown drive. From the GT 7 yard line, Toafili gained outside leverage and pounced on the pylon to give the Seminoles a 7-3 lead. The touchdown run was the spark the offense needed as it started a scoring drive for the ‘Noles. The Seminole defense shut down Georgia Tech’s offense early in the second quarter and Florida State’s offense was on the board. This time, quarterback Jordan Travis wasted no time pushing the ball downfield.

On 2nd & 9 from the FSU 22-yard line, Jordan Travis dropped back into the pocket. He looked to his right and lofted the ball toward the sideline, where it was caught with a snap by Johnny Wilson. Chased by security, Wilson dug his right foot into the ground and cut left to elude the would-be tackler. Johnny Wilson was in open space with nothing but the end zone in front of him. After a long drive, Wilson stretched across the goal line and completed a 78-yard touchdown reception to extend Florida State’s lead.

Wide receiver Johnny Wilson was exceptional on the afternoon, totaling 111 yards and 1 touchdown on just 3 receptions.

It was only the second quarter and the ‘Noles only led 14-3, but the momentum was fully on Florida State’s side. Defensive coordinator Adam Fuller’s defense was absolutely suffocating and offensive coordinator Alex Atkins’ offense was coming alive. Georgia Tech simply didn’t respond to the offense, and another quick 3 put the ball back in the hands of Jordan Travis, who was absolutely spinning and giving away.

With around 4:20 left in the second quarter, Florida State started its drive by going the wrong way on a false start. Travis quickly made up for lost ground by connecting with Trey Benson for 10 yards. Benson received the handoff on the next two plays from scrimmage and scored on another 14 yards. The ‘Noles rushed to the line and drove deep again and Travis was able to find tight end Cam McDonald for a 43 gain to the GT 4 yard line. However, a (questionable) offensive pass interference wiped the big play off the board and pushed the Seminoles back to their own 38-yard line.

On 2nd and 22, Jordan Travis dropped back into the pocket and handed Lawrence Toafilim an absolute dime down the left sideline. Toafili threw one interception and took the ankles of the last remaining defender in the way before entering the end zone. Florida State has officially fired on all the bottles.

Running back Lawrance Toafili also boasted a standout stat line on the day with 13 carries, 70 yards and 1 TD on the ground, as well as 5 receptions, 84 yards and 1 TD through the air.

4. Ryan Fitzgerald completes a 2-minute drill with a made FG before halftime

That was not the end of the scoring in the second quarter. With no timeouts and only 1:14 left in the half, Florida State’s offense executed the two-minute drill masterfully, charging up the field on 8 plays. Ryan Fitzgerald made sure the ‘Noles finished the half with three more points when he hit a 34-yard field goal attempt.

While the two-minute drill was exceptional to watch and the points before halftime were a plus, the real highlight here is Ryan Fitzgerald’s performance throughout the game. The kicker was perfect on the day, hitting both of his field goal attempts (34, 24) and all 5 extra point attempts.

5. CJ Campbell scores in his first game back since suffering a potentially season-ending injury 74 days ago

By the end of the 4th quarter, the game was well under control and the Seminoles were the dominant force on the field in every aspect. With time winding down, Florida State had a moment on offense that showed the improved state of the culture within this program. But before I get into that, let’s take a moment to look at how the defense made this moment possible.

I’ve alluded to this a few times throughout this breakdown, but Florida State’s defense was absolutely flat on Saturday afternoon. The defense gave up just 264 yards of total offense and held Georgia Tech to an astounding 66 rushing yards. You read that right. Georgia Tech, a team that ran the ball for 119 yards against Clemson, rushed for just 66 total yards, an average of 2.2 yards per rush. FSU was also successful going down the field on third down, allowing just 2 of Georgia Tech’s 13 3rd downs to succeed (15%). In fact, of Georgia Tech’s 11 offensive drives during the game, the Seminole defense forced a punt on 7 of them (and 1 turnover on downs). Florida State’s defense left marks throughout this game, and when the Yellow Jackets threatened 4th & Goal late in the game, Fuller’s group held firm and kept Tech out of the end zone.

A stand on the Florida State goal line meant the ‘Noles would have another opportunity on offense in the waning moments of the game. The Seminoles marched 97 yards down the field to punt the ball for another touchdown. Remember that cultural moment I mentioned earlier? Well, the runner who carried the ball for six was CJ Campbell. In August, there were initially concerns that Campbell had suffered a potential season-ending injury during preseason camp. Just 74 days later, he took the field for the first time as a Seminole and crossed the goal line for the first touchdown of his career.

“It was unbelievable to score my first comeback. There’s nothing like it. It was so surreal,” Campbell said after the game. “To run off the field and see everyone celebrate for me, it shows what a big family we are here and what a brotherhood we have.”

Amid the self-inflicted blow of turnovers and penalties, the Seminoles’ performance in Saturday’s game was a much-needed breath of fresh air. This high-scoring, action-packed affair was an electrifying start to the second half of the season and is sure to give the ‘Noles more confidence ahead of their matchup with Miami.