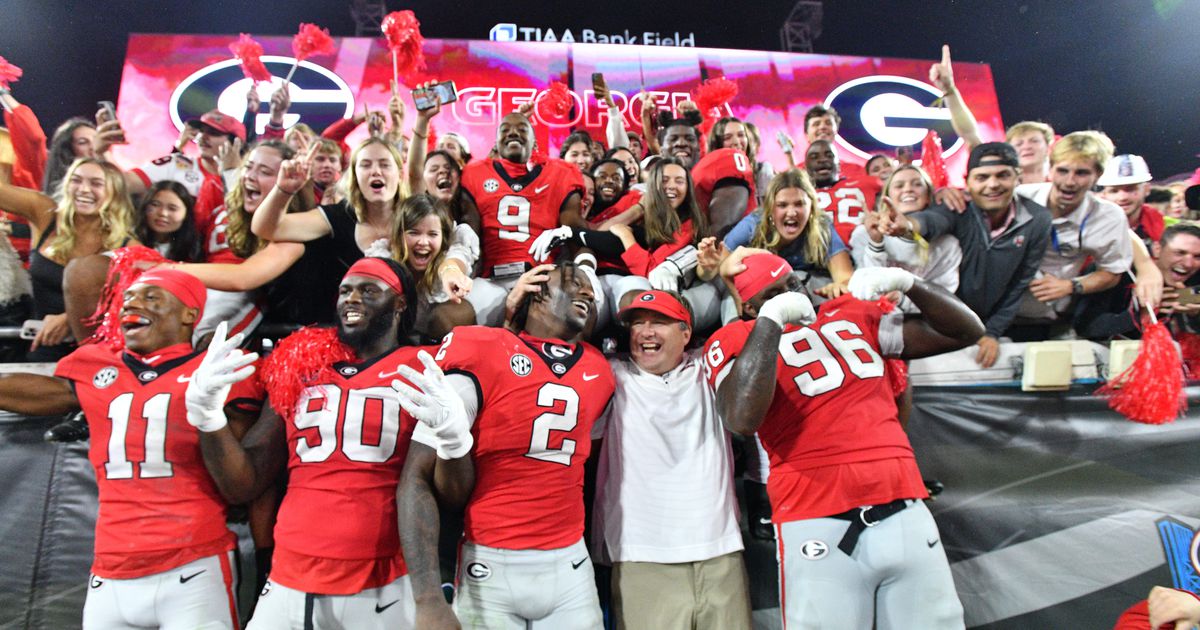 Back then, the Bulldogs went old school, Dooley style. They responded with a six-play, 78-yard touchdown drive that featured five runs and one pass to make the score 35–20. After getting the ball back from Florida on downs, Georgia’s capped another scoring drive with its fourth rushing touchdown of the night and Kenny McIntosh’s second. At that point it was clear that the gators would be defeated again.

“I’m sure coach Dooley enjoyed it; I’m sure he was watching,” Georgia linebacker Stetson Bennett said. “You know, sometimes you take what they give you and sometimes you give them what they take.”

Smart told the players in the locker room that he would dedicate his efforts Saturday to Dooley. He said he visited Dooley in the UGA football practice room on Tuesday, “not knowing that would be the last time I talked to him.” The Bulldogs learned Dooley had died after their plane arrived in Jacksonville Friday afternoon when the coaching staff’s phones lit up with text messages.

“I know if he looked down on it he would have enjoyed the first half; I don’t know if he’d enjoy the latter,” Smart snapped. “He and Erk (Russell) probably laughed it off together. (Dooley) meant so much to us. In honor of him and their family, it was special.”

When the teams retired to the locker rooms at halftime, the Bulldogs appeared to be in complete control of the game. Georgia’s Ladd McConkey scored on a touchdown pass from Bennett with 17 seconds left in the first half to make it 28-3.

But the first 14 minutes of the third quarter belonged to the Gators. After scoring just two first downs in the first half, they got four times as many in the third stanza.

Florida opened the second half with a 13-play, 75-yard touchdown drive that was fueled by a personal foul penalty against freshman defensive lineman Bear Alexander of Georgia. He didn’t hear the whistle on a fourth-round play in which Smart called a pre-snap timeout and Alexander ran into quarterback Anthony Richardson, who stopped his drop-back.

Then Georgia picked up a fumble on a turnover. On the Bulldogs’ first possession of the second half, McIntosh managed to strip the ball behind quarterback Amari Burney and Florida’s Trey Dean recovered at the Georgia 27. It took seven plays to get 18 yards, but the Gators got a field goal. that.

On the Bulldogs’ next possession, Georgia moved quickly down the field with two McIntosh runs totaling 33 yards. But on the third play of the drive, Bennett fouled running back Daijun Edwards on a punt route. Burney threw for the interception, which also came with a personal foul penalty against the Gators. This backed them up at their 18-yard line.

On third-and-six, receiver Xzavier Henderson ran free down the right sideline on a sacked coverage by rookie safety Malaki Starks. The 78-yard touchdown run was the longest of Henderson’s career and made it a one-score game at 28–20.

The Bulldogs responded with an offensive possession that surely sent Dooley sky high with a superior Russell. Georgia ran the ball five times on a six-play drive that ended with a 22-yard touchdown run by Daijun Edwards. It was Edwards’ second touchdown of the game and fourth for the Bulldogs. At the time Georgia had less than 200 yards rushing. It would end up at 239.

Edwards finished with 106 yards rushing and McIntosh with 90. The Bulldogs averaged 6 yards per carry.

“I thought Kenny showed something tonight,” Smart said of the Fort Lauderdale senior. “When he came out after that fumble, he had that eye of the tiger and wanted the ball. He ran the ball hard and physical and got yards after contact. That’s a big credit to the offensive line and a big credit to Kenny as well. That drive was big for us.”

The win was the Bulldogs’ fifth in the last six meetings with Florida under Smart. Dooley was 17-7-1 against the Gators.

“We talked about (Dooley) before the game and we said, let’s win it for him,” said Georgia tight end Brock Bowers, who had a career-best 154 receiving yards and a touchdown in the game. “It was just wonderful to honor him.

Georgia exposed many flaws, especially in the third quarter. The Bulldogs’ secondary continues to give up explosive deep passing plays down the sidelines. That’s not good news as No. 3 Tennessee and its passing offense come to Athens next week. The Gators finished with 371 yards after managing just 88 in the first half and finished with 16 first downs.

Meanwhile, after getting star defensive tackle Jalen Carter back from a sprained knee that sidelined him the last four weeks, the Bulldogs lost senior linebacker Nolan Smith late in the first quarter to what could be a separated shoulder.

All of the above goes a long way toward explaining why linebacker Jamon Dumas-Johnson — aka “Pop” — was far from celebratory in postgame interviews.

“No, I’m not,” Dumas-Johnson said when asked if he was happy. “I mean, as a leader on this defense, we have higher expectations. We couldn’t live with them today. The bigger thing is “W” or “L” and we got a “W” today.

While Georgia’s offense played well, with another 40-plus point effort and 555 yards rushing, Bennett’s play was spotty against a Gators defense that ranked last in the FBS in third-down conversions. Bennett finished with 316 yards passing and two touchdowns, but threw two interceptions and completed just 50% of 38 passes.

McConkey had four catches for 51 yards and a TD, but had another drop. Tight end Darnell Washington and slotback Dominick Blaylock also saw first-down passes end up in the Gators’ possession.

But the highlight of the game came on Georgia’s fifth offensive possession. Bennett unleashed a throw towards Bowers, who was closely covered by Burney, running stride-for-stride with him down the left sideline in front of the Georgia bench. Burney tipped the ball but fell. Bowers eventually hauled in the pass, but only after he waved several times.

When Bowers finally gained control, there was no one between him in the end zone. He was untouched the rest of the way for a 73-yard touchdown.

“I just saw the ball bounce and it was plucked out of the air,” Bowers said. “I was surprised I caught it, to be honest. I didn’t run as good a route as I wanted.’

In many ways, though, it was the imperfections that made Georgia’s victory beautiful. Overpowering an SEC opponent while not playing your best speaks volumes for toughness and resilience.

“I don’t like losing momentum in the game; I enjoy that we never blinked,” Smart said. “Kids were saying the right things on the sidelines. You know when adversity hits there are two things: you break or you bond. And our team bonded.”

Sophomore center Sedrick Van Pran said, “I just want to express my condolences to the Dooley family. The coach mentioned it in the pre-match meal today and we wanted to go there today and celebrate his name.”